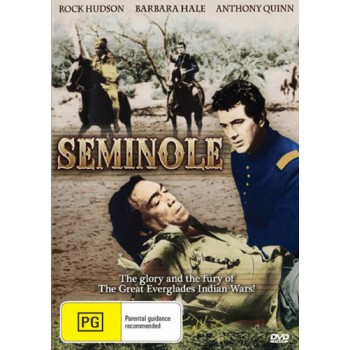 Directed by the great Budd Boetticher (Ride Lonesome, Comanche Station) and tautly scripted from his own story by Charles K. Peck Jr., Seminole thrillingly meshes action, betrayal and radical politics. Rock Hudson stars as Officer Lance Caldwell who is assigned to Fort King in the Everglades. A boyhood friend of Seminole Indian chief Osceola (Anthony Quinn), Caldwell opposes the maniacal Major Degan’s (Richard Carlson) plans to wipe out the local Seminole tripe. Caldwell is rescued by Osceola after a violent battle and is swiftly court- marshaled. When Osceola returns to Fort King in an attempt to initiate peace he is murdered and Caldwell framed for the crime. Can the truth prevail? Look out for screen legend Lee Marvin as surly Cavalry Sergeant Magruder!