Home » Out of the Past

Out of the Past 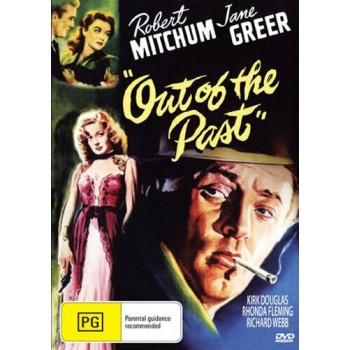 Everything you want in a film noir you'll find in Out of the Past. A tenacious detective [Robert Mitchum] spinning his wheels to make good. A drop-dead heauty (Jane Greer) up to no good. A moneyed mobster (Kirk Douglas) with a shark's grin. Plus double-crosses and fall guys. Shadowy rooms and bleak souls.

Mitchum solidified his tough-guy persona in this archetypal film noir directed with memorable style by Jacques Tourneur (Cat People, I Walked with a Zombie). He plays Jeff Bailey, a one-time private investigator walking the straight and narrow of small-town life...until an acquaintance from his past pulls him back into the troubles he'd left behind. "Build my gallows high, baby," Bailey sneers as events stack up against him. With dialogue like that and much more, Out of the Past builds its reputation high.